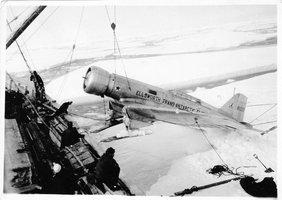 Source for above photograph: http://en.wikipedia.org

Chris Braathen - the man who "made" Valkyrien

Christopher ”Chris” Braathen served as DNL’s customer representative at Sikorsky and supervised the construction of the Sikorsky S-43, LN-DAG “Valkyrien”. I came in contact with his son, Mr. Christopher Mullens Braathen, (born 1937) who gave me access to the family’s diaries and photographic archive. As Chris Braathen became so involved in Valkyrien, we would like to say a few words to celebrate this unique and gifted technician and engineer.

On the 1st of August 1937 an aircraft lifted off from the lake Bogstadvannet for a flight over Oslo and the Oslo fjord. The pilot was Mr Arild Widerøe, and among the passengers were Chris Braathen and his American-born wife Molly Mullens. Their six-month old son was supposed to join them, but shortly before departure, they took him off the plane. The flight proceeded without any drama, and the five people on board surely must have enjoyed the flight. Suddenly the pleasure flight ended in one of the worst accidents in Norwegian avia¬tion at that time: A wing broke off and the aircraft went spinning into the fjord. The people on board were presumably killed instantly – there were no survivors.

Chris had an eventful life. He was born on the farm Hedenstad in the district of Østre Eiker (today the district is named Øvre Eiker) on the 29th of June 1893 and was the eldest of six children. After leaving secondary school, he started working in a mechanical workshop in Eiker. After a year he left and became a logger, and soon he became the best logger in the district.

His restlessness continued though – it still wasn’t what he wanted to do. In January 1914 he left Norway and travelled to German South-West Africa (today Namibia). There he became an apprentice to the blacksmith working for the Norwegian whaling company Deutsche Walfang-Gesellschaft Sturmvogel mbH (Bugge & Olsen, Larvik). When the First World War broke out, the ship was confiscated and Chris, being from neutral Norway, helped transferring 400 people to Cape Town by ship. This was not a journey without drama. As the newspapers wrote: ”...but the ship took in water during a storm and and started to sink. Chris was one of the people who ran to man the pumps while others went looking for the leak, but in vain. All others lost their heads in the confusion, but Chris kept his cool. Again and again he dived into the rising water until he found the leak. Then he tore off his clothes to help plug the hole, before racing off to get materials and tools, and with water above his head, he managed to stop the leak so that the ship and all on board barely made it to Cape Town.” How much of this is true is hard to say, but he clearly had a guardian angel. He started sailing on Norwegian ships, and all four ships he was on were torpedoed. Each time he survived without significant injuries.

After the war he resumed his studies and passed his engineer exam with flying colours. He then started studying at Horten Technical College in Norway, and later got his engineering degree from the Thüringer Technikum in Germany before leaving for the USA in 1927. In 1928 he joined Captain Richard Byrd and his expedition. Chris was employed in teams laying out the course to 82 degrees north and deploying depots of supplies for the geological expedition that would follow. The leader of this expedition was Mr Arthur T. Walden, a veteran of several expeditions to Alaska, but when they found themselves in a very critical situation, he asked Chris to take charge.

Chris led the party to the finishing point 200 miles (320 km) south of Little America, and he maintained the leadership on the return journey as well. He really was a jack of all trades, and together with Arthur Walden, they built the main camp out of any materials they could find. In spite of temperatures of -60°C on the outside, it was toasty warm inside, and the place was called Lucky-heim. The expedition included several Norwegians who all did an excellent job. In this camp, Mr Sverre Strøm and Bernt Balchen completed their new sleigh design that was also used for the geological expedition to the Queen Maud Mountains in the Antarctic.

After returning to New York and giving a number of talks and presentations in and around Boston, he put all his efforts into becoming a skilled aeronautical engineer. He worked as an apprentice at several aircraft manufacturers besides his studies, and was employed as an aviation mechanic at Roosevelt Field, Long Island. In 1932 he graduated as an aeronautical engineer in Montreal – again with excellent results. While studying, he got a private pilot’s licence and went parachuting! Following his graduation, he joined others to start up a mail route in Northern Ontario where aircraft was the only means of transport that could quickly reach the outskirts of the province. Then he was asked to join the Ellsworth-expedition to the Antarctic.

Among Chris Braathen’s decorations is the New York State Medal for Merit and the Naval Secretary Adams Large Gold Medal. He was also an honorary member of the International League of Seamen.

During the construction of DNL’s Valkyrien, Chris was a supervisor acting on behalf of the company. When Valkyrien arrived from the US and had to be reas¬sembled, he spent many long hours at Gressholmen. This aircraft was his pet project, and not only did he lead the maintenance work; he was often the flight engineer too.

During the summer of 1937, he joined the crew on the Oslo – Stockholm flights and looked after the engines if necessary. He beamed with joy when the engines purred like a cat, and constantly listened to their tunes. On board the aircraft, he really was in his element, and he could talk for hours on the future of aviation – he felt that this was a great time to experience. Norwegian aviation history can be proud to have a member of his calibre, but unfortunately his life and work ended far too early. Chris Braathen and Molly Mullens were laid to rest at Nordstrand Gravlund in Oslo and their son was raised by his uncle and aunt.

There will soon come an article about the accident in which Chris and Molly died. This will be published here and on www.europeanairlines.no/articles 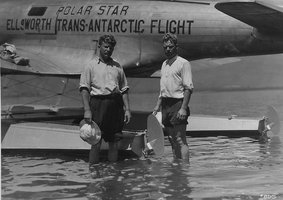 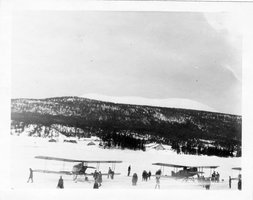 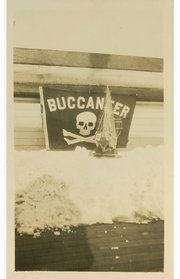 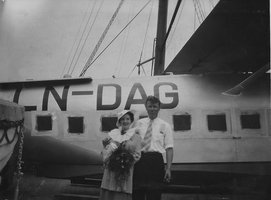 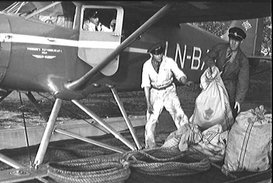